Back
Tuan Andrew NGUYEN Enemy’s Enemy : A monument to a monument 2009
Technical information of the work

This sculpture by Tuan Andrew Nguyen is a response to the official monument erected in Ho Chi Minh City in memory of the immolation on 11 June 1963 of the Buddhist monk Thich Quang Duc, who set fire to himself to draw attention to the discriminatory and repressive policies directed at the Buddhist community by the regime of Ngo Dinh Diem, the Catholic president of South Vietnam who was put in power by the USA. The event was given worldwide coverage, and led to a coup d’état and the fall of the Diem government. In 2010, a memorial, comprising a bronze statue over six metres high depicting the monk sitting amid the flames was unveiled on the very spot where he immolated himself.

The work Enemy’s Enemy: Monument to a monument features that same depiction of the sacrifice, delicately chiselled in the wood of a baseball bat from a well-known maker (Louisville Slugger). The baseball bat is a residual symbol of the American presence in Vietnam. The social symbols of baseball and the act of erecting a monument to the monk Thich Quang Duc, although taken from different contexts, are both made to serve political contingencies. The current Vietnamese government hypocritically takes over a symbol of the struggle against oppression, while under the Communist regime, the Buddhist religion could only be reconciled with the political and ideological agenda if it was an instrument for exerting control over the individual. Sport and religion can then be understood as social phenomena bringing together a community, and also as factors that can sometimes provoke conflict and violence.

His works have entered the collections of the Museum of Modern Art and the Guggenheim, New York. He had a recent show at Carré d’Art and has taken part in numerous Propeller Group exhibitions around the world. 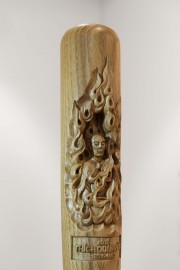 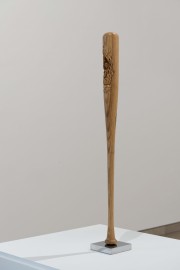