Anna Boghiguian, born in 1946, does drawings and paintings of individuals and urban spaces and is also a poet and writer. Her artistic approach may be understood as an attempt to make a map of the world. For her, individuals are conditioned by their surrounding space and the ego by walls built up through this conditioning, be it cultural, religious or political. She is constantly travelling in order to do away with borders, creating wherever she happens to be, but always returning home to her birthplace, Cairo. In the Sixties, she also did compositions based on the sounds of the city, which she transcribed into the field of painting. Her paintings are always very dense compositions, and they sometimes include her own writings. Her narratives combine personal and political history, passing from past to present, deconstructing reality on the way to the mythological. We are faced with a world in movement that is changing all the time.

In Mapping the Ear as in many recent works, the body is fragmented. The brain, the ear, the eye, body parts that put us in contact with others, linking the visible and the invisible, are isolated. She has often used pictures of the Ganges and the Nile, two rivers charged with history. Here we recognize the presence of an ear linking the inside and outside of the body while summoning up a sound dimension, the sounds of the world of which we are a part. The ear conveys the notion of listening, and vigilance. This work is done with mixed media: paint, sand, and grasses.

Anna Boghiguian builds an eminently personal space inhabited by her story, but also listening out to the world and to issues relating to its transformation.

Anna Boghiguina was born in 1946 at Cairo (Egypt).

She had a recent show at the ZKM (Karlsruhe), at Documenta 13 (Kassel), the Venice, Sharja, Istanbul Biennales, and at the New Museum New York. 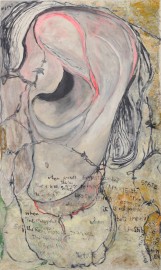