He is one of the major figures in contemporary art. For several decades he has been building a sensory and critical space through a constellation of photographic images, forms and references more or less directly tied in with our surroundings. In many of his offerings, politics are never far away, although never tackled head-on. Throughout his work, reality, the imaginary and the symbolic are interwoven in an ever-delicate balance.

Quelque chose noir et ombre [Something Black and Shadow] is a work made with piano strings and composed of two similar figures but which have slightly different tensions. One is a kind of image of the other. As very often in Moulène’s works he makes reference to areas outside of the visual arts: here sound with the piano strings, but also literature through this reminder of the title of a book by Jacques Roubaud.

As very often in Moulène’s sculptures, the object lies somewhere between figuration and abstraction and interferes with the viewer’s desire to recognize a shape, a metaphorical or symbolic reference.

They can also remind one of scale models for utopian architectures, but in this work Jean-Luc Moulène is sculpting primarily the movement of forms by defining an extremely sensitive geometry.

Jean-Luc Moulène, was born in 1955 in Reims, lives and works in Paris.

His works are part of public and private collections, Centre Pompidou Paris or Dia Beacon New York. An upcoming solo exhibition at the Centre Pompidou is scheduled for October 2016. 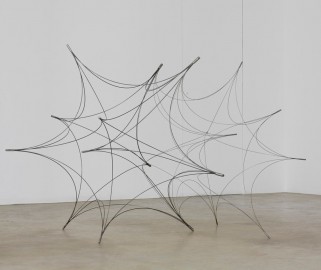