As part of the Rencontres de la Photographie

The works of Julien Creuzet (born in 1986 in France) suggest painful stories, both personal and more universal, without it being possible to separate one from the other. He places at the heart of his installations the link between identities and economies, whether it be the transatlantic trajectories of the West Indians or those of migrants from the South. If the terms "archipelic" and "creolization" come back like mantras in his vocabulary or in articles written about him, it is because it is indeed a way of doing and being in the world, fragmentary and crossed by a multiplicity of identities. In this video he subtly and poetically probes another aspect of colonization, trade, the exploitation of natural resources, living creatures, fauna and flora, men and women. Black and white photographs of various plants are superimposed on color images of birds and objects. He has drawn on these images, hiding certain elements under a thick mass of large black and red lines that look like foliage. Sometimes these collages are interspersed with floating images of small figures, such as the cowboy giving way to a stereotypical representation of a native man. These haunting images are accompanied by melancholy and soft music written and composed by the artist. Entitled Blogodo after a Creole onomatopoeia that evokes brutality and speed, this sound piece blends English lyrics with Creole pieces. Like the hybrid forms that Julien Creuzet sculpts, the language in which he writes is composite. We find the idea of creolization by which Edouard Glissant describes the unpredictable results of intercultural crossings. "I present to you as an offering the word creolisation, to signify these extraordinary unpredictable results, which prevent us from being convinced of an essence" (Edouard Glissant).

“ Cloud Cloudy Glory” is a trance, a tale where different imaginations meet. Julien Creuzet’s works are also offerings, signifying unexpected possibilities and other possibilities of the world. 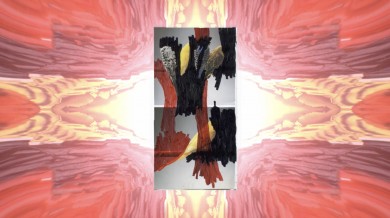 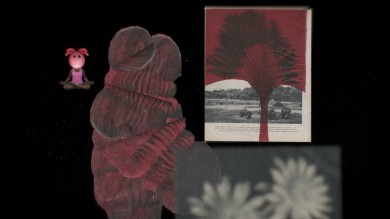