Rosalind Nashashibi is a London-based filmmaker and painter of Palestinian and Northern Irish origin. Her films use a language that is both documentary and speculative, based on the observation of her own life and the world around her in dialogue with elements of fiction or science fiction, often proposing models of collective life. Her paintings also evoke real or more dreamlike spaces where people or animals may appear, often sharing the picture plane with signs and apparitions. Her films are shot at eye level, drawing an intimate space. They become a living material with an active surface made of pulsation and light. Bodies, objects, glances, landscapes share the same sensitive space.
«Denim Sky» is a feature film that was shot in three parts over a four-year period between 2018 and 2022. It was filmed on the Curonian Spit on the Baltic Sea, as well as in Edinburgh, London and the Orkney Islands in Scotland. The artist herself appears in the trilogy with her children and friends. The growing friendships and her reconsideration of the concept of family have prompted Nashashibi to delve deeper into one of the most important subjects of her recent work - love and the search for lasting relationships and solidarity, especially those that go beyond the notion of the nuclear family. In the first part of «Denim Sky», the protagonists discuss the science fiction novel The Shobies’ Story (1990) by the American writer Ursula K. Le Guin, in which community and companionship are also important themes. Another theme that links the film and the book is that of non-linear time as a new human reality. In the contemporary world non-linear time is structured by fragmented forms of belonging and various types of distancing between people, both voluntary and forced.
Painting plays an important role in both the film and the exhibition as a whole. «Most of the paintings I’ve done have incorporated my curiosity about signs - whether it’s the cross or the frame, or more baroque» She has been interested in the monogram, those recognisable yet enigmatic emblems that combine several letters in a single design. Monograms can represent a person, an entity or a group, or even a signature. They also have a magical dimension. For Nashashibi, a monogram is a distilled unit of identity that holds its own mythos or glamour, and a sign is a concentration of power and meaning.
Several paintings made recently in a post-pandemic period will be presented in the exhibition.

Rosalind Nashashibi has exhibited at Documenta 14, Manifesta 7, the Nordic Triennial and Sharjah X. She was nominated for the Turner Prize in 2017 and won the Beck’s Futures Prize in 2003. She represented Scotland at the 52nd Venice Biennale. Her most recent solo exhibitions include CAC Vilnius, Secession Vienna, CAAC Seville, Chicago Art Institute and Kunstinstuut Melly Rotterdam. She was the first artist in residence at the National Gallery in London in 2020. 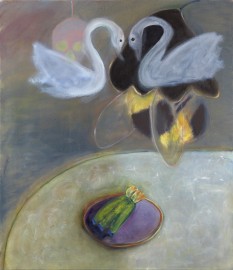 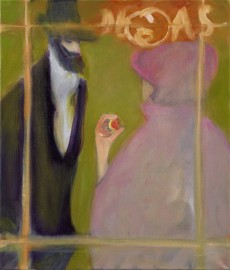 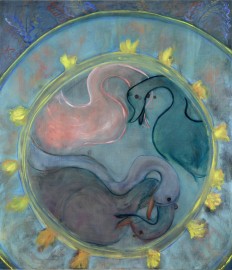