As a cornerstone to Ruins, Gerard & Kelly present work from their ongoing series Modern Living, mining what the artists call “ruins of modernism” for their hidden choreographies and radical social experiments. On view is Schindler/Glass (2017), a two-channel video installation filmed at the Schindler House in West Hollywood, California, and Philip Johnson’s Glass House in Connecticut. Both are homes the architects built for themselves to shelter relationships as experimental as their designs. In Schindler/Glass, the modernist home becomes the frame for “modern” intimacies, where dancers fall in and out of sync, couple and split, and learn to live together.

Shown for the first time as an installation, Panorama (2021) was shot at the Bourse de Commerce prior to the museum’s opening as the Pinault Collection. The Parisian building, originally a grain market, was transformed in the 19th century into a shrine for the glory of commerce and finance. The panoramic paintings in the rotunda, dating from 1889, are a testimony to French colonialism. Three performers of different origins and artistic backgrounds—Soa de Muse, recently seen in Drag Race France, and dancers Guillaume Diop and Germain Louvet of the Paris Opera Ballet—inhabit the empty rotunda re-designed by Tadao Ando. Scored to the music of American composer Julius Eastman, the film confronts the monumentality of the architecture with the fragility of performing bodies and a multiplicity of identities.

The exhibition also includes several site-specific interventions. Gerard & Kelly’s first short fiction, Bright Hours (2022), will be projected at the Cinéma Sémaphore in Nîmes. Inspired by the fleeting encounter between architect Le Corbusier and the American dancer and singer Josephine Baker on a transatlantic cruise, Bright Hours imagines how this relationship transformed modern architecture.To conclude the exhibition in March 2023, Gerard & Kelly will re-stage State of (2019), a performance featuring three dancers who use the American flag, the U.S. national anthem, and a pole dance to question symbols of nationalism. With the Maison Carrée, a first-century Roman temple, in the background, the performance takes on new and expanded meanings.

A catalogue co-edited by Mousse accompanies the exhibition, with an essay by art historian Miwon Kwon and a conversation between Lou Forster and the artists.

Brennan Gerard and Ryan Kelly have been collaborating since 2003. They were Van Lier Fellows of the Whitney Museum Independent Study Program before attending the Interdisciplinary Studio at UCLA. In France their work has been presented by the Festival d’Automne, CND Centre national de la danse, Centre Pompidou, and Palais de Tokyo, among others. Gerard & Kelly participated in the 2014 Made in L.A. Biennial and the 2017 Chicago Architecture Biennial. Their work is included in the collections of Solomon R. Guggenheim Museum, New York; Hammer Museum, Los Angeles; LACMA Los Angeles County Museum of Art; FRAC Franche-Comté, Besançon; and Carré d’Art. 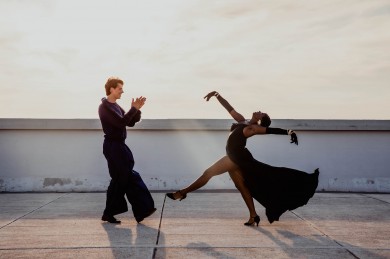