The work of Eija-Liisa Ahtila is focused on the representation of paranormal states. His works are, as in ancient tragedy, human tragedy where express strong emotions felt by his characters. They glide between past and present. Ahtila establishes a contrast between the strong realism of the film image and the embodiment of states of consciousness of his characters, assuming a real where multiple levels overlap. This exhibition presented six major video installations by the artist, including two new ones.

This exhibition was a co-production with the Moderna Museet in Stockholm and the Kiasma Museum of Helsinki. 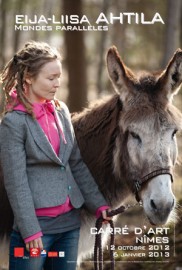